If you are having heavy rain and snow melt in your area, be aware that landslides could occur.  They can also occur after earthquakes and other natural disasters.  They can move really slow or they can move faster than you can run. If you are living in an area that had a forest fire be especially aware of landslides. It doesn’t take much to get one moving.  If the ground is saturated the area is more likely to have landslides.

If you are living in an area known for having landslides, talk to your family about evacuation plans, where are you going to meet, do you have someone you can all call in to in case you get separated.  Practice your plan, if you have handicapped or elderly people in your group make sure that you can help them in case of emergency.  Build a Go Bag or bug out bag. Something you can grab in a moments notice with some essential items in it to get you and your family through the crisis.

If you know a landslide is eminent get out of the area, call 911 so rescuers can get moving to the area.  Help your neighbors if possible. In times like these everyone needs to help each other.   Listen for cracking tree branches or rolling rocks, if there is water associated with it pay attention to how fast or slow it Is moving. Be aware there could be a flood behind the landslide. They can both be caused by the same weather events.

If you make it out of your house watch the road very carefully, water could have eroded underneath and taken the road out. Make sure to take your pets with you, who knows when you will be allowed back into the area. Many landslides happen at night, if you are experiencing a storm stay vigilant and alert. After the danger is over stay away from the area. There could be downed power lines, wait for the authorities to give the all clear before going back to your property.

Stay calm when facing any emergency. If you are prepared a head of time it will be a lot less stressful for you and your family. 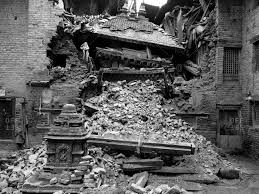 Before, During and After an Earthquake

Before an earthquake make sure you know a few safety things. Do you know where and how to shut off the gas or utilities? Have you went through your house and fastened down anything that could fall? For instance heavy pictures, book shelves, ceiling fans , mirrors, your television and cabinet. Even all the little knick knacks you have are they secured so they don’t become flying death traps. There is a ton of things to do before an earthquake, take the time and acquaint yourself with your home and its contents.

What do you do during an earthquake?

Stay put where you are if at all possible until the shaking stops. If you are in a spot where something could fall on you try to get as low as possible on the floor next to some low furniture.  Standing in a doorway is not a good idea either, you could get hit by flying or falling objects. Stay as low to the ground as possible, a table might be a good spot to be. Drop down to the ground on your own before the earthquake knocks you down.  Stay away from the windows, glass or outside doors and anything that could fall on you. If you are in bed stay put if possible. Hazards are hard to see sometimes. If you happen to be outside when an earthquake strikes get out in the open. Stay away from buildings, utility lines and anything that could harm you if it fell. If you are in a car stay off the roads if you can, bridges and roads may have been damaged in the earthquake. Try to move your car into an open area and stay put.

What do you do after an earthquake?

If you find yourself trapped under rubble try not to move around too much, you could kick up dust making it hard to breathe or you could dislodge something that could harm you.  If you have a cell phone check and see if it works. If it does call for help. Find a rock or piece of rubble to bang on a pipe or wall with so the rescue people can find and help you.

If you are not trapped when the shaking stops carefully look around. If you have an easy path to get to safety leave the building and go to an open area. Be prepared to drop down on your hands and knees in case there is after shocks afterwards. Watch for downed power lines or trees that could have been damaged that could fall.

Contact your loved ones and make sure they are ok. You should have a plan in case of emergencies to contact each other. Sometimes you might have to call someone out of state because the phone lines locally don’t work. If that is the case make sure everyone knows who to call and what your plan is.

We all spend our whole lives trying to stand out in a crowd. In an emergency situation you might want to think about blending in. You might wonder why, the reason is simple. If you look like you are too flashy, or confident or have something someone would want, you become a target. An angry mob of people will act first and think later. Don’t get caught in a an angry mob.

So what do you do to become invisible, first of all you want to blend in and don’t draw attention to yourself.  Wear clothes that are earth tones or neutral colored. Don’t wear anything someone would remember later. If you have a scar or tattoo that someone might recall at a later date you might want to cover it up.  Be as ordinary as you can in all ways. If you dress like you are on a secret combat mission people will remember that. That is not blending in to your surroundings.  You want to become invisible to everyone, including the police and the bad guys.

Know what is happening but don’t look like you do or care. Stay to yourself, don’t look directly at people, avoid eye contact. Move slowly and deliberately don’t do anything that would make someone be able to remember you.

If you are in your own home town you already know how to act like a local. If you are from a big city and find yourself in a rural area, learn how the locals walk and talk. Remember blending in to your surroundings is what you are trying to achieve.  Stay away from big crowds, learn the streets in your area so you know which areas are safe and which one are not.  Learn where the hospitals, police, gas stations are located in the area you are in. That is one of the first things I do when I go somewhere new. I find out at least where the hospital is, you never know what could happen.

If you are a woman you must be especially diligent. Don’t do anything to stand out, even wearing perfume could cause someone to notice you. Smell is a powerful thing.  Keep your situational awareness, don’t look directly at someone.  Blend in don’t leave any kind of impression on those you might come in contact with.

If you look like you have something to hide or something valuable, people will take notice. They will wonder why you are so paranoid, that will make them want to investigate. You might have something they want or need. You don’t want to walk around oblivious to your surroundings, you just want to look that way.  Pay attention see and listen to everything. Be ready for anything, don’t look prepared but be prepared.